The Cryosphere are those parts of the Earth and other planetary bodies that are subject to prolonged periods of temperatures below the freezing point of water. These include glaciers, frozen ground, sea ice, snow and ice. One of the main aims of the EGU Division on Cryospheric Sciences is to facilitate the exchange of information within the science community. It does so by organizing series of sessions at the annual EGU assembly, and through the publishing of the open-access journal `The Cryosphere’. The division awards the Julia and Johannes Weertman medal for outstanding contributions to the science of the cryosphere.

The 2020 Julia and Johannes Weertman Medal is awarded to Julienne C. Stroeve for her fundamental contributions to improved satellite observations of sea ice, better understanding of causes of sea ice variability and change, and her compelling communication to the wider public.

END_OF_DOCUMENT_TOKEN_TO_BE_REPLACED

The 2020 Division Outstanding Early Career Scientist Award is awarded to Anna E. Hogg for outstanding research in the field of satellite remote sensing of the cryosphere and her contributions to science communications.

END_OF_DOCUMENT_TOKEN_TO_BE_REPLACED

Latest posts from the CR blog

Image of the Week – Icebergs increase heat flux to glacier

Icebergs are ubiquitous in Greenland’s fjords, melting and releasing freshwater as they float towards the open ocean. The amount of freshwater released from these icebergs can be vast – the equivalent of around 50,000 Olympic swimming pools per day in some fjords. New research reveals that this freshwater causes fjord currents to speed-up, which can actually increase the amount of heat delivered to the Greenland Ice Sheet. Ocean-driven retreat of Greenland’s tidewater glaciers Over the past two decades, Greenland’s tidewater …

END_OF_DOCUMENT_TOKEN_TO_BE_REPLACED

There are countless Christmas films, and almost all of them feature some form of snow, ice or cold weather. There are the classics such as Home Alone, Elf and Miracle on 34th Street, and there are the newer, shall we say ‘Netflix’ style, which feature Princes, Knights and Vanessa Hudgens. There’s just no way to watch them all over the festive period, so let us recommend you our top 5 Christmas films with a sprinkling of cryo… 1 – The …

END_OF_DOCUMENT_TOKEN_TO_BE_REPLACED

Albedo or albedon’t? One possible solution to global warming is to turn everything white to increase the planet’s albedo, i.e. how reflective it is (see, for example, this website). A higher albedo would be one way to reduce global warming, by reducing the amount of incoming shortwave solar radiation absorbed by the planet’s surface, which is then re-emitted as longwave radiation that can be trapped by greenhouse gases in the atmosphere. This would hypothetically allow us to compensate for the …

END_OF_DOCUMENT_TOKEN_TO_BE_REPLACED

Hysteresis For Dummies – Why history matters

Perhaps you have stumbled upon the word ‘hysteresis’ before, for example in connection with the stability behavior of our Earth’s large ice sheets and their long-term effect on global sea-level rise, or the long-term stability of the Atlantic Meridional Overturning Circulation, or even in another context outside earth/climate science. Or you might have come across this term during your studies, but your memory of it is slowly fading. That was the case with me: when I started to study the …

END_OF_DOCUMENT_TOKEN_TO_BE_REPLACED 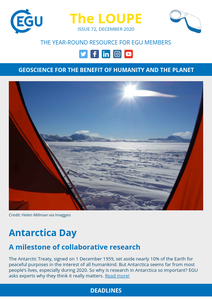 Why is research in Antarctica so important? In this issue of The Loupe, EGU asks experts why they think it really matters. We also highlight blogs from each of the month’s featured EGU divisions: Climate: Past, Present & Future, Cryospheric Sciences, and Nonlinear Processes in Geosciences.

This issue also discusses the extensive fee waiver programme for vEGU21. The abstracts submission deadline is 13 January 2021 at 13:00 CET!

Last, but not least: for those scientists who tend to shop late, there’s the Top 5 (last-minute) gifts for geoscientists. From the ultimate sample collection kit to cake (no, really!), EGU has you covered with our last-minute guide. And the #1 gift? You’ll need to read the blog!