Studies related to the Geodynamics Division include all aspects of geodynamic processes in the lithosphere, mantle, and core. They encompass different approaches, including observations, imaging, theory, modelling (numerical simulations and laboratory experiments), and interpretation. Examples include the dynamics of subduction, mid-ocean-ridge processes, vertical and horizontal plate movements driving mountain building and basin formation, lithosphere dynamics, mantle convection, and core dynamics.

The 2021 Augustus Love Medal is awarded to Irina M. Artemieva for her outstanding research contributions to our understanding of the complex processes that control the evolution, thermal structure, stability, and dynamic topography of the continental lithosphere.

END_OF_DOCUMENT_TOKEN_TO_BE_REPLACED

The 2021 Division Outstanding Early Career Scientist Award is awarded to Mark J. Hoggard for outstanding research in connecting observations at the Earth’s surface to its deep interior.

END_OF_DOCUMENT_TOKEN_TO_BE_REPLACED

The 2020 Augustus Love Medal is awarded to Harro Schmeling for his outstanding contributions to understanding the dynamics of the mantle, lithosphere and two-phase flow.

END_OF_DOCUMENT_TOKEN_TO_BE_REPLACED

The 2020 Division Outstanding Early Career Scientist Award is awarded to Tobias Keller for outstanding scientific contributions related to understanding magma dynamics and igneous systems in the mantle and lithosphere, including the roles of volatiles and reactive flow.

END_OF_DOCUMENT_TOKEN_TO_BE_REPLACED

Latest posts from the GD blog

The Sassy Scientist – It’s All In The Mix

END_OF_DOCUMENT_TOKEN_TO_BE_REPLACED

Accretionary prisms are wedge-shaped bodies of crustal rocks that are commonly known to have formed by accommodating the component of convergence along subduction margins. These prisms, primarily wedge shaped with lateral variations in topographic height from hinterland to foreland are commonly characterised by a gentle and uniform slope towards the frontal margin (for instance, the Himalayan fold-thrust belt has a uniform gentle slope of 4° towards the frontal margin). However, there are some accretionary wedges that are found to possess …

END_OF_DOCUMENT_TOKEN_TO_BE_REPLACED

Postdoc appointments: the forgotten terrace of Purgatory. Where researchers are sentenced to linger till either a positions opens in the Heaven of permanent contracts, or they realise that, after all, they are not interested anymore. This terrace is composed of different levels of various length. Nobody knows how many levels there are and how long they are, or should be. Raul asks: What is the ideal length of a postdoc contract? Dear Raul, Let’s get it right out there: the …

END_OF_DOCUMENT_TOKEN_TO_BE_REPLACED

Getting to the core of The Core

Imagine my surprise when I found out that one of the regular attendees of our virtual institute coffee in Leeds actually worked on the movie ‘The Core’. Yes, you read that correctly: The Core, maybe the best bad science movie out there! (Although Menno had some great other suggestions last week!) So, in between many cups of coffee (well, mugs of tea actually, we are in the UK after all), I interviewed Jon Mound, associate professor at the University of …

END_OF_DOCUMENT_TOKEN_TO_BE_REPLACED 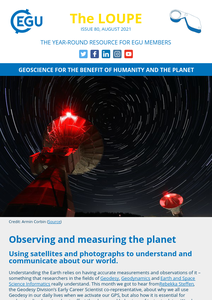 In the August issue of The Loupe learn all about what geodesy is and why it’s so important from Geodesy Division Early Career Scientist co-representative Rebekka Steffen and find out our Top 5 Tips for getting a great science photograph to accompany your research publication or science communication! You can also watch the free recording of our special webinar about Ocean Conservation with Rebecca Helm, available now on our YouTube channel.

Don’t forget that time is running out to submit your #EGU22 scientific session proposal or short course idea; the deadline for submissions is Monday 6 September 2021 so don’t delay, submit today

In addition to the latest Journal Watch and GeoRoundup of August EGU journal highlights, this issue also reminds members to nominate yourself or others for the upcoming Council positions by 15 September.